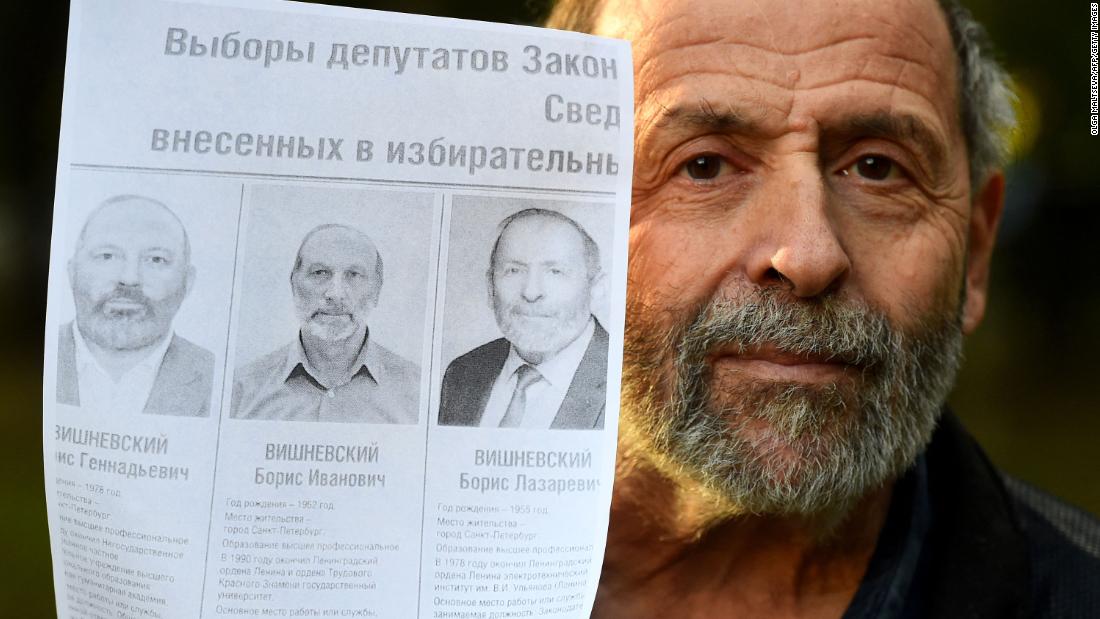 Liberal Yabloko Party candidate Boris Vishnevsky is running for his seat in the St. Petersburg Legislature later this month. Russian parliamentary elections take place from September 17 to 19, during which regions will choose members of the State Duma, the lower house of the Russian parliament. Several regional and municipal leaders will also be elected.

But Vishnevsky said two other Boris Vishnevsky stood up against him and changed their appearance to be more like him, calling the situation a “scam” in a Twitter message Sunday. Posting a photo of the three of them on the ballot on Twitter, Vishnevsky called them his “doubles”.

CNN has reached out to the other two candidates for comment but has yet to receive a response.

“Of course, this is undoubtedly a political fraud. They seek to confuse citizens into mistaking one of the fakes for the original,” Vishnevsky told CNN on Tuesday.

Their only goal is to get voters to make mistakes and tick the wrong box, the politician is convinced of this.

“Obviously there is no other way to stop me [from winning]”said Vishnevsky, when asked why he thought this had happened.

The list of candidates for deputies of the Legislative Assembly of St. Petersburg has three Boris Vishnevsky in the same St. Petersburg No. 2 district, the Vasileostrovsky electoral district.

For the last two, the website of the electoral commission gives their former names in brackets: Shmelev Alexey Gennadievich and Bykov Victor Ivanovich. It seems that it is only their surnames that they have decided to keep.

Vice-president of the Yabloko party, Vishnevsky calls himself an opposition candidate and claims that Yabloko is the only opposition party to participate in these elections.

â€œAll the other parties are Putin’s parties in different costumes,â€ he says. “They all support Putin’s policies in one way or another.” In St. Petersburg, Vishnevsky is one of the main opponents of the current city governor, Alexander Beglov.

“Apparently my chances of winning are rated as very high, so now they have to resort to these dirty schemes. It speaks of a high assessment of my merits and the level of my support in town. You know, it’s not. the way you fight weak candidates, â€Vishnevsky told CNN.

The other two Vishnevsky run independently, but one is linked to the ruling United Russia party and was his deputy for many years. Until recently, the 59-year-old Viktor Bykov – now Boris Ivanovich – was the chief assistant to the Deputy Speaker of the Legislative Assembly, Sergei Soloviev.
On Monday, Vishnevsky filed a official complaint with the chairman of the Central Election Commission, Ella Pamfilova, urging the body to conduct an inspection and provide information on the original names of the candidates just below their new ones on election posters in the centers of the territorial election commissions.

Pamfilova called such means of campaigning “derision”, but said the law allows Boris Vishnevsky’s namesakes to stand for election.

“I think it’s just a shame, an outrage. It’s already the extreme and lowest point of decline for political strategists who serve their clients. It’s just a mockery of voters,” said Pamfilova. Kommersant FM radio Monday.

According to Pamfilova, the electoral committee does not have the legal means to fire the candidates but would prepare a proposal for new lawmakers “so that such shameful cases simply do not happen”.

The St. Petersburg Election Commission said only full namesakes with the same first name, last name and patronymic are required to indicate their former names on the ballot.

Such a strategy is not without precedent in Russian electoral battles.

This method was reportedly first implemented in 1998 during the elections to the Legislative Assembly in St. Petersburg, when two people with the same name ran against Sergey Mironov.

Since then, homonyms have repeatedly clashed in the same districts in various regions of Russia.

In July, Kommersant newspaper found more than 20 pairs of candidates with similar or identical last names among the candidates in the upcoming elections.
Pamfilova called the nomination of duplicate candidates by some parties in the September elections “dirty technology aimed at deceiving and misleading voters”, according to TASS.

“We have already received several complaints and we observe that in a number of regions, unfortunately, dirty cloning technology of various types of duplicates is used. We already have statements from party leaders who are outraged,” Pamfilova said. to state media in July. .