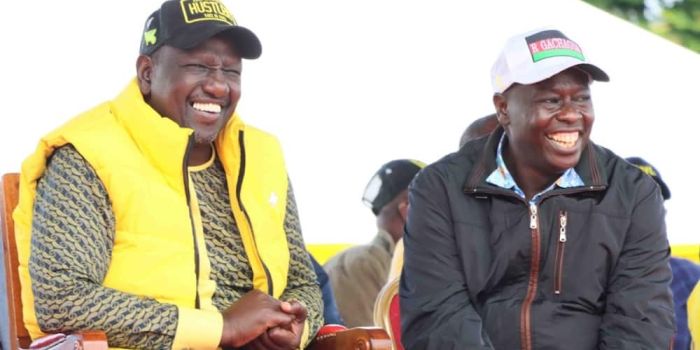 On April 8 this year, Rigathi Gachagua – the heir of the late Nahashon Gachagua Reriani and the late Martha Kirigo – made clear his ambitions to become the kingpin of Mount Kenya.

Gachagua, a brother of the first Nyeri County Governor, the late Nderitu Gachagua, recounted how he dedicated his life to public service and improving the lives of Kenyans, especially the people of Mount Kenya.

During his first term as an MP for Mathira Constituency, the MP was first thrust into leadership in 1989 when he was chosen to serve as Deputy Secretary in the Ministry of Home Affairs and of the National Heritage.

In 1990, he was transferred to the Office of the President as a district cadet, before being appointed personal assistant to the head of the civil service in 1991.

Gachagua was appointed to a more senior role after being appointed as the first District Officer in charge of Kakamega District before being transferred to Ng’arua Division in Laikipia District in 1997.

In 2002, the year that marked the end of KANU’s 40-year administration, Gachagua found himself working as President Uhuru Kenyatta’s personal aide when Uhuru made his first bid for the presidency on a KANU ticket.

When his late brother, Nyeri Governor Nderitu Gachagua was hospitalized, Rigathi Gachagua was accused of imposing his will on the county and acting as temporary governor when the county had a deputy.

In 2017, Rigathi Gachagua was first elected MP for Mathira and quickly made a name for himself as a vocal and confrontational leader.

Although he had been a strong supporter of Uhuru in the past, Gachagua was among the lawmakers who left the Jubilee Party and formed the United Democratic Alliance (UDA) to show their support for DP Ruto.

As the conversation rages over how Ruto’s government will be organised, Gachagua’s name has featured prominently in discussions surrounding the running mate and future Cabinet Secretary of the Interior. He also stood out at the National Conference of UDA Party Delegates, having sat in the front row next to DP Ruto’s wife, Rachel Ruto.

The relationship between Gachagua and Ruto dates back to 2002, when they were both luminaries of KANU. The MP also said he and the DP were neighbors in Karen.

“I have known Ruto for two decades. He’s my neighbor in Karen and our families are close. He’s also a critical thinker,” Gachagua said in an interview.

His rapid political rise has been attributed to his great oratorical skills, his background from a strong political family, and his vast wealth.

His net worth is estimated to be in the billions – and has had run-ins with law enforcement over tenders worth Ksh 12 billion that were awarded to his companies between 2013 and 2017.

Ruto is expected to make his highly speculated decision on who his running mate will be, ending months of speculation.

Kenyans.co.ke learned that the competition is between Gachagua, Governor of Kirinyaga, Anne Mumbi Waiguru, and Senator of Tharaka Nithi, Abraham Kithure Kindiki.

Gachagua was adamant that Ruto’s running mate must be from the Mount Kenya region. He insists that the promise to bring in the Vice President of the region is what made them support Ruto and walk away from Uhuru.

“Ruto’s running mate must come from the mountains. Before we were joined by the other people we had our own arrangements which we had discussed and my position has been that whatever had been previously agreed cannot change drastically to the detriment of the Mount Kenya area,” said Gachagua during an interview.